Growing up in the 1950’s, I remember my Dad, Grandpa, and Great Uncles playing Sheepshead at family gatherings. I was most impressed by the loud snapping noise that my two Uncles could make when it came their turn and they threw a card down in play.  I never knew for sure whether they were gloating in victory or agonizing in defeat but their explosive displays were truly remarkable.

Sheepshead is derived from Bavaria’s national game Schakhopf, and it is still very popular in Wisconsin.  In fact, in 1983 it was declared the official card game of the City of Milwaukee.  I don’t think we have an official card game here in Aloha.  I looked up the rules recently and found them fairly complicated with cards having different strength based on denomination and suit and…  well I gave up trying to remember it all.

Among the photographs and other treasures I have from my Aunt Ann’s estate is a Ledger Book containing records for the “High Ups Sheepshead Club organized Jan. 17th, 1911”.

Among the dozen or so members, I recognize several relatives:

Most of the others are cousins or in-laws of some sort, but their relationship are too complicated or distant to explain here.

The first pages of the book contain the “Constitution of The High Ups Sheepshead Club”.  Neatly hand written in eight rules are standards and practices for membership, attendance, game rules and etiquette, dues, the schedule for weekly games and monthly membership meetings, and the election of officers.

The lucky winners of the first election were:

Detailed accounting was maintained of who attended each Wednesday night game and how much they won or lost. (usually 15 cents or less).  No-shows were fined 5 cents; but according to the Constitution they could be excused for sickness or work.

But the High Ups Sheepshead Club did more than just play cards and drink beer.  They planned and hosted picnics, at the club’s expense; where they also drank beer.  For example, the minutes from a meeting in 1914 reports “A motion was made and second to have a 1/4 barrel of beer and not to tap the same until we are at the picnic grounds.”  Probably sound advice to not start imbibing too early.

Notice that this was referred to as a “Buss Picnic” and the most expensive item was the “Buss”.  Also, they allowed John Hodel 60 cents to make arrangements with the park.  What’s with all that?

Deer Brown Park, 300+ acres of athletic fields, trails, and a golf course, touts itself today as being only minutes from downtown Milwaukee.  But in 1912, assuming that none of my relatives yet owned automobiles, it would have been a long 12 miles trek from the neighborhood where the High Ups’ lived.  Apparently, the solution was to hire a bus to transport all the people and supplies to the park.   In 1922 they held another picnic at Lake Denoon, which is twice as far away, and they went via “Auto Truck”.

Another time they chose to hold a “May Ball”. A dance. 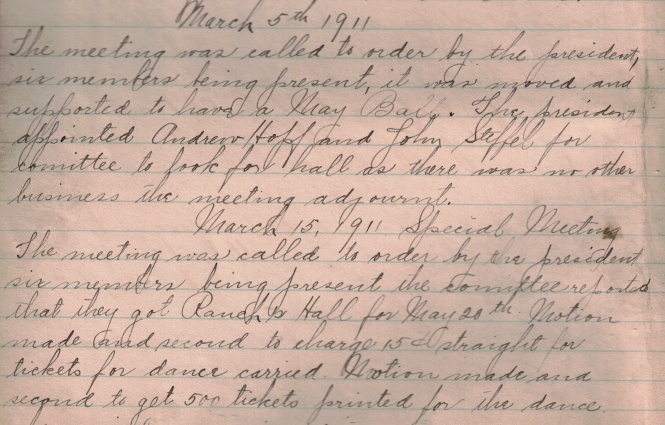 As seen, the dance was to be held at “Rauch’s Hall”.  I found some dance halls in Milwaukee at that time but not one named Rauch’s.  If any of my family had a dance hall it is still news to me.  But they intended to print 500 tickets (admission 15 cents), and the rental fee for the hall itself was $30, so it had to be more than just someone’s living room.

The May Ball went off as planned on May 20, 1911.  The Income & Expense Report presented after the dance is hard to decipher and I am not sure if they made or lost money but I can say this: In 1912 when the subject came up again, they decided to pass.

The following picture was also found in Aunt Ann’s estate, unfortunately, this is one of the few that she did not write any names on.  The guy scratching his head, second from left resembles other pictures I have of John Steffel, her husband.  And, the portly guy on the far left could be her Father, my Gr-Grandpa Rauch; although he usually had a mustache. If either of those are right, then it would explain why Aunt Ann kept the picture.  Whoever they are, the smoking, drinking, and card playing look exactly as I would have imagined a Wednesday night meeting of the High Ups Sheepshead Club in old  Milwaukee. 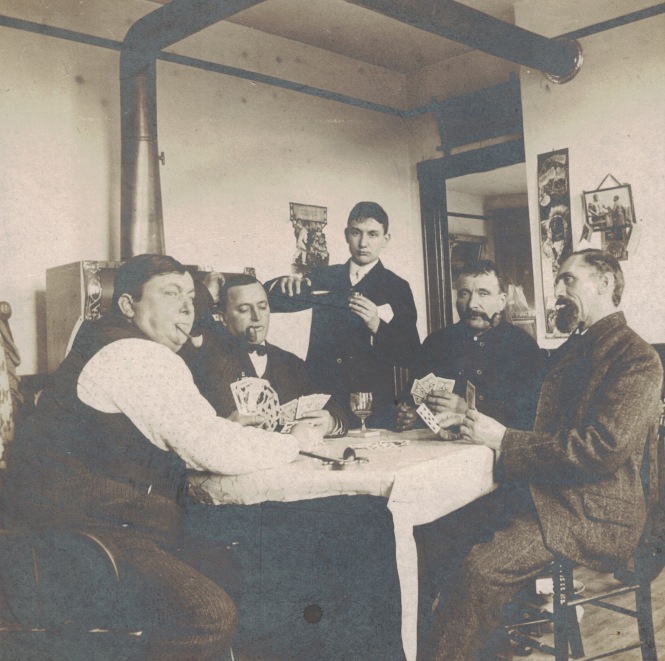