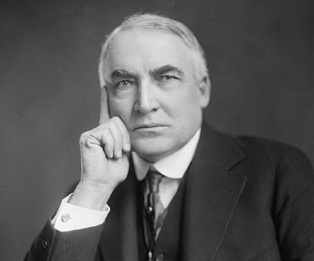 We Hardings probably all get asked if we are related to the President?  The truth is that we are, but it is so distant that you need a computer to figure it out.  Warren G. Harding is my  6th cousin once removed and our common ancestor is Stephen Harding Sr. (1681 – 1750).  The main advantage to having a president in your line is that once you get past that common ancestor, any research  done on him, taking us back in to England, is valid for us too.

A slightly closer yet still distant relative is Benjamin Franklin Harding.  Acccording to the computer, he is my 2nd cousin 4 times removed.

B. F. Harding was born in Tunkhannock, PA.  He studied and became a lawyer in his hometown and in 1849 he migrated to the Pacific Coast.

In 1850 he was chosen a member of the legislative assembly of the territory of Oregon; and was again a member and also speaker of the house in 1852.

In 1853 he was appointed by President Pierce U.S. district attorney for the territory and in 1854 was made its secretary, which office he held till Feb. 14, 1859, when Oregon was admitted as a state.

He was a representative in the state legislature, 1859-62, being speaker the last two years.

He was then elected as a Union or Douglas Democrat to the U.S. senate to complete the unexpired term of Edward D. Baker, who was killed at the battle of Ball’s Bluff. He took his seat Dec. 1, 1862, during the third session of the 37th congress and served to March 3, 1865, when he returned to Oregon and engaged in the practice of law.

Closer still is my 1st cousin twice removed, William Lloyd Harding.   I never met him, of course, but I think I have talked to people that did know him.

After graduating from Morningside College in 1905 he established a law firm in Sioux City, Iowa.

He entered the 1906 campaign, and was elected to the Iowa State Legislature by an impressive majority.

In 1912, he sought and won the Lt. Governorship, serving two terms with Governor G.W. Clarke.

In 1916 he received the Republican nomination for Governor, and in a campaign which the state historians have said overshadowed the second election of Pres. Wilson, Harding swept into office with the election of Nov. 7, 1916. He served 2 terms in office as Governor during the years of 1917-1921.