In 1871 my Gr-Gr-Grandparents, John & Miranda (Warner) Perry, and their two children Albert, 9, and Luena, 4, migrated from Nepeuskun, WI to Sibley, IA.  The 400 mile wagon trek took just over a month.  During the journey and continuing for the first few months of their new life in Iowa, Miranda recorded her daily experiences in a diary.

Thirty some years later, she apparently took the volume with her when she, by then a widow, went to live with her son-in-law and daughter, Alva & Luena Harding, in Garden City, SD.

Many more years later, after Miranda, and then Alva, had both died, Luena and her daughter, Lulu, moved from Garden City to Watertown, SD.  But before leaving, they had to clean out the old farm house.  As the story goes, it was who Lulu found the diary in the attic and asked “What should we do with this?”  Fortunately, it occurred to someone that they should KEEP IT!  And so they did; and it has subsequently passed through many hands before falling into mine. 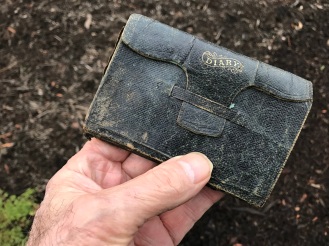 I treasure this old book and in order to share it with as many as possible, I have scanned it in its entirety and transcribed the important journal entries.  I offer it to you here for viewing and download via a link at the end of this post.

The link will take you to a folder containing four items:

All four files are available for viewing and download here.